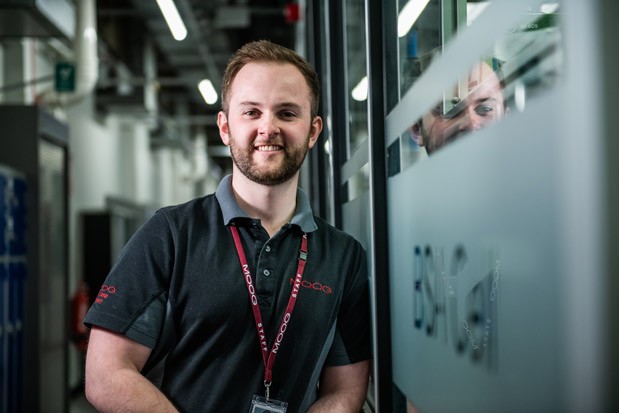 Tom started his apprenticeship at Moog later than other candidates, after having been in a different job for a few years in a role he was unhappy with. He decided to make a change and apply for a position at Moog, where he’s been given the room and support to learn and grow.

After working in customer service for some time, Tom was made redundant and used that as the catalyst to find something new. “I’ve always had an interest in engineering, and I’m very much a hands on and practical person. I put two and two together after being made redundant, and saw that Moog had vacancies for apprentices – I was aware of Moog’s good reputation from others in the engineering industry, so I went for it and luckily got the job,” Tom said.

Tom has been an apprentice at Moog since September, and is currently on his third department rotation working in the BSA cell, which includes preparing the bodies of different valves. “I love the hands-on aspect of the work I’m doing. The main jobs that I’m doing at the moment include the lapping and deburring of bores in valve bodies and the grinding of spool lands to meet customer requirements. Each job is different in its own way, but all are really satisfying when completed from start to finish. Whenever I see a plane flying, I can think to myself that my work may have contributed to that, which is something I can take real pride in,” Tom explained.

Throughout his time at Moog, Tom’s found that the team have been supportive at every step: “I could tell when I first started here that it was a great place to be – everyone was really welcoming.”

“Everyone’s really keen to help you learn and there’s a really good culture here – if something goes wrong, everyone will want to find out what went wrong and find a solution, rather than put the blame on the individual. I think that’s the best way to be, as it will help the individual and Moog to improve in the long term,” Tom continued.

Following his apprenticeship, Tom is looking to continue at Moog and see where his career will take him: “Once I’ve finished my apprenticeship to the best standard I can, I want to improve myself even more and look to progress in the business. It’s a really great place to work and it’s really satisfying being able to contribute to something that can make a difference out in the world,” Tom concluded.

Read more stories about our apprentices and why they chose Moog.