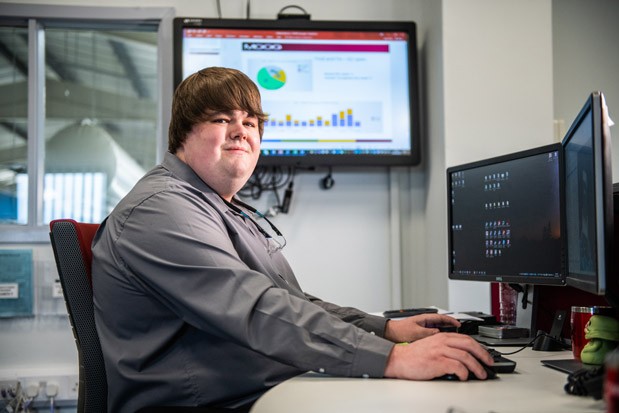 When at school, David always had a talent for maths, but wanted a more hands-on career. After joining the Moog team as an apprentice, David was able to forge a career that catered to both his academic aptitude and his practical nature.

David joined Moog straight after finishing his GCSEs and was inspired to seek out an engineering career after completing a Level 2 Engineering diploma. “I enjoy learning the theory, but also enjoy solving problems,” David said. “So I looked at aerospace engineering as a career option, and I discovered Moog was close by.”

While an apprentice, David was given the opportunity to complete his HNC, and following this, he joined the team as a semi-skilled machinist before moving onto a shift rotation. However, he wanted to do something that would stretch his problem-solving skills, so applied for a position as an Associate Manufacturing Engineer. Having since been promoted to a full-time Manufacturing Engineer, David’s had plenty of opportunity to develop his skills and make the most of his talents.

“The transition from shop floor to manufacturing engineering was strange, because I’d never done anything like it before, but it was a good experience,” David said.

“Being an apprentice, I’ve had lots of opportunities and learnt a lot at Moog. Apprentices are like gold dust – once you’re in, you get loads of support, there are training plans, and the management team want to push you as far as they can. When you’re an apprentice, I feel like your manager tests you to see what you’re capable of – they do push you at times, but they do it to help you develop even further,” David continued.

As a Manufacturing Engineer, David’s day consists of creating processes for new products – so, for any new product developments coming through, he creates new processes that allow the production operatives to create the components needed for those specific products.

“My main section is the EDM cell, so I generally look after that and make sure everything’s okay. I’m often problem solving, figuring out what’s gone wrong and fixing the main source of it, then trying to stop it from happening again. If I’m not doing that, I’m spending time looking at our current manufacturing processes and working out how to improve them. For example, instead of it taking two hours to make one part, I try to find how to make that process more efficient and to reduce the cycle time,” David said.

When entering his current role, David found that he was filling the shoes of a member of staff who had retired, so he quickly had to get to grips with the job: “I’m quite driven and I do like challenges – when you’re dropped in the deep end, it’s either sink or swim. At that time, there was a lot of support there too. Moog is like a family in that aspect.”

His experience as an apprentice was invaluable at this stage, as it allowed him to draw on the experience of his colleagues. “If you’re unsure on anything, the Moog team will do what they can to help you out – you just need to ask. As an apprentice, if I went to a new section – say, the Lathe cell – there are guys there who will take you under their wing. I’m a nightmare in a sense, I want to be the best, I like to ask a lot of questions, but for me, knowledge is key. The team here will always try to answer your questions, let you make your own mistakes, and support and help you to become the person you want to be.”