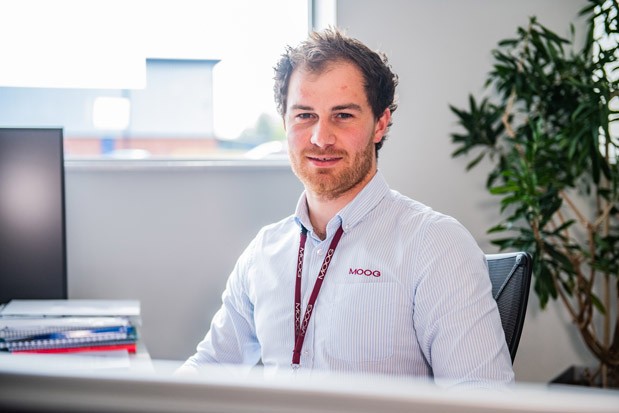 With a passion for motorsport, Greg Chilton began his apprenticeship at Moog following his A-levels, after discovering more about the company at a local apprentice fair. Now, Greg is part of the Product Engineering team, developing and servicing valves for Formula 1 teams across the globe.

Despite having finished school with A-level qualifications, Greg had to start from the beginning to become a Moog apprentice: “I was initially employed as an Industrial Apprentice, and my very first year was spent full-time at college at Gloucester Engineering Training, learning the hands-on core skills for engineering, so that’s turning, milling, fitting, and really getting the basics drummed into me. At the time, it seemed a bit of a backwards step, coming from an A-Level environment, but it was really essential in getting tuned into engineering.”

From there, Greg was given the opportunity to complete his HNC and HND qualifications, all with total support from Moog. This allowed Greg to transition from an apprentice to a fully fledged member of the Product Engineering team.

“When I started working at Moog, I first started in the motorsport clean room area, and it was there that I started to learn how the E024 series product, which we sell to all our F1 teams, worked – how it was assembled and tested and all the critical processes inbetween to make sure we deliver a conforming product,” said Greg. “It was there really that I learned how finely tuned the micro-valve really is – a hand-crafted product, made right here in the Cotswolds – and how important it is to repeat these processes to ensure you have a conforming product time after time.”

There’s no typical day at Moog for Greg, as his workflow for the week often changes in response to what happened at a race over the weekend. “Recently, following a race, there were a lot of DNFs where teams were unable to finish due to a range of different issues, so I knew that we would have a busy week after that!” said Greg. “However, all the teams are very cooperative and use us as a resource to investigate and identify any of their problems. Some of our valves are very small, but a vital component – if any debris becomes contaminated within a valve, it’ll be up to us to figure out what the debris could be, or where it’s come from within their system so we can work with them to solve the issue.”

Throughout his career so far, Greg’s been fortunate enough to work with plenty of professional motor-sport teams across the UK and Europe, and has been involved in crucial investigations to improve performance: “I’ve done a lot of work with one of our customers regarding their power steering valves. After an indepth investigation, I was able to get to the bottom of the problem and we delivered a conforming product that improved performance. I got a visit out of it as well, so it was great to go and see one of the customers in action.”

Transitioning from an apprenticeship to being part of the Product Engineering team was a natural fit for Greg, as he started working with the team around halfway through his apprenticeship. “I found my feet there and knew it was the department I wanted to be in, providing that reactive support into the motorsport industry. So, my advice for anyone who wants to join a particular team after they finish their apprenticeship would be to build up your knowledge base and keep learning – if you know the product base, you won’t be dropped in at the deep end and it’ll be a natural transition.”

As a keen kitesurfer and paraglider, Greg’s also come to appreciate the flexibility that Moog provides through their flexitime system, so he’ll often come into work early so that he can finish early and get down to the beach on the weekends. “The atmosphere at Moog is also quite informal – so while they have high expectations, being a bit more relaxed helps to motivate people and there’s a real sense of being part of a team,” said Greg.

“A lot of people have been here for a very long time and I think that really says something about a company. Often, when people have left, a fair few come back – personally, I’ve never looked back, it’s been a great place for me to work,” Greg concluded.