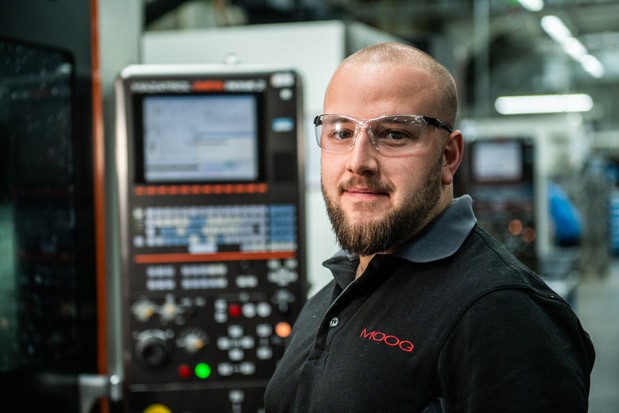 Rob initially started working for Moog as a contractor, but after getting a taste of what it was like to work at the company, he was keen to apply for Moog’s apprenticeship programme and take his career to new heights.

After seeing various family members and friends thrive at Moog, Rob was looking for an opportunity to get his foot in the door. “I asked Moog if they had any jobs going, so they sent me a nine-month vacancy as a machinist in Plant 1,” Rob explained. “While I wasn’t doing the kind of machining I hoped to at first, I really enjoyed working at the company, so I asked if I could apply for the apprenticeship. I had to go through all the normal procedures, but luckily, I got through!”

Thanks to his drive and ambition, Rob finished his apprenticeship a year early to become a fully fledged Production Machinist. “I pushed so hard to do it early, as I’m a bit older, and took my apprenticeship at 19. My mentor for the apprenticeship was my current supervisor – he was quite happy for me to finish early and felt that I was at the level required to do so,” Rob said. “He gave me time every Friday to go to college and get all my necessary qualifications finished, which was really helpful.”

After finishing his apprenticeship, Rob started working on a shift rotation. In a typical shift, Rob will produce the components that are needed to build Moog’s valves, but also gets jobs set up for other members of the team, which involves getting the necessary paperwork, tooling and gauges that they need out and setting the correct programs on the machine. He’s also responsible for his own quality control, and as an OSV stamp holder he is regularly audited to check he is working to the correct procedure.

“You start as a Level 1 Production Machinist after your interview, but you can go all the way up to become a cell leader,” Rob said. “That’s where I’d like to get to – I don’t really see myself in the office, going into manufacturing engineering. I quite like doing what I do on the shop floor, so I’d like to aim for the top.”

Rob’s found that at Moog, he’s had lots of opportunity to get involved in exciting projects, like working with the Royal International Air Tattoo, and that the company goes out of its way to look after their employees: “Moog likes people to progress. Whether you’re an apprentice or a staff member that’s keen and willing to move forward, they’ll help you out. I’ve been trying to buy a house, so being able to finish my apprenticeship a year early has put me in a much better position to do that,” Rob concluded.