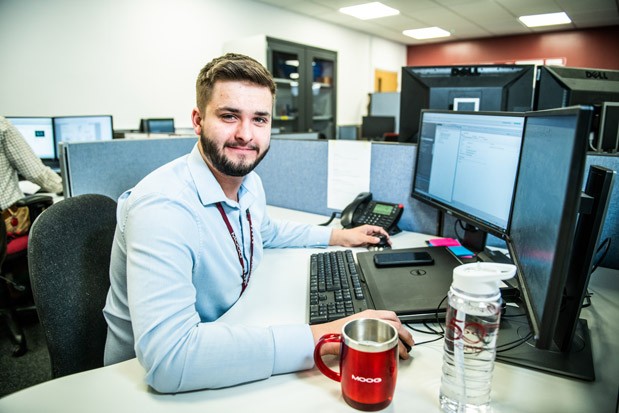 Tom joined Moog as an apprentice, but had greater ambitions in mind. Before his apprenticeship finished, he applied for a Junior Design Engineer position within the company but was awarded an Associate role instead, due to his hard work and initiative.

Like many apprentices, Tom began with a year at college after being awarded a place at Moog, but was keen to get a headstart in the engineering world – he had also started a Level 2 NVQ in Machining and Manufacturing Engineering before applying. “I’ve got a lot of engineers in the family, and I’ve always liked doing things with my hands, so I applied for a role at Moog after my first year at college,” Tom said. “A few family friends work here and they said it was a good place to be, so I was keen to see what it was like.”

While undertaking his apprenticeship, Tom was able to pursue a number of additional qualifications, including his HNC, and with just six months left on his apprenticeship, saw the opportunity arise for a Junior Design Engineer. “It had been on the board for quite some time, and while I hadn’t actually finished my apprenticeship, I really wanted to go for it. So I asked my boss at the time whether he’d put my name in the ring – it was more just to show interest so that the next time a position came up, I might be considered. But he encouraged me to go for it and did everything he could to support me,” Tom continued.

Tom was given the chance to become an Associate Design Engineer, rather than a Junior, as long as he could complete his HNC on time. He completed his apprenticeship early, and for a few months before he took the position, was able to spend one day a week in the Engineering office to find his feet and get everything set up and ready.

“Everyone at Moog Tewkesbury is really helpful – they’re more than happy to take time out of their day to walk you through something and make sure you understand it properly, which I think we’re quite lucky with,” Tom said.

As an Associate Design Engineer, Tom’s role is quite varied, and each day often revolving around making drawing changes and offering design support to others in the team. However, he’s also taken responsibility for the 3D printing department within the business, along with another colleague: “At the moment, we’re mainly printing prototypes for tooling, and we create visual aids for customers – as opposed to just saying what it could look like, you can even touch it and this is what it’ll look like, what it’ll be made out of.

“It’s still relatively new in an industrial fashion, definitely – I think personal printers have been around for quite a while, and people have been doing little things like making homemade toys, but actually putting 3D printing into production is still something that’s evolving and could be quite a big part of the future, especially for a company like Moog,” concluded Tom.