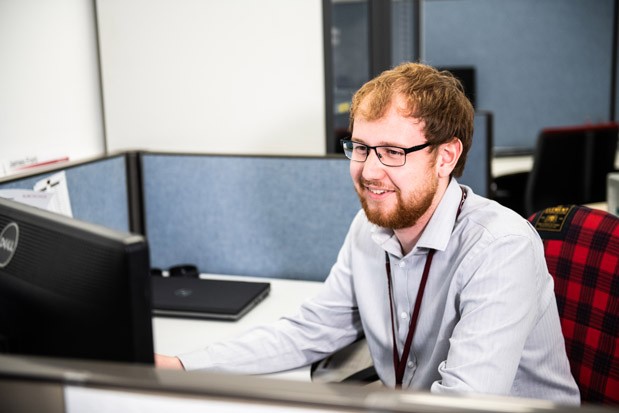 Having always assumed he would go straight to university, James hadn’t initially considered a more vocational career path after his GCSEs. After finding A-levels weren’t for him, James applied for an apprenticeship at Moog, and has since progressed through the company to become an Associate Engineer in the New Products Integration department.

Having always been interested in motorsport and aeroplanes, James was looking for apprenticeships in those fields – luckily for him, Moog produced controls for both! Starting in Assembly & Test as an apprentice technician, James had the opportunity to get up close with the variety of Moog products he now tests and trials. He then transitioned into product support, and has been able to complete his HNC and HND as well.

“When I started my apprenticeship, I was looking for something that would allow me to still be academic while using practical skills. I’ve had great opportunities to work in different areas of the business, and I’ve also been able to take vocational short courses at the National Fluid Power Centre and University of Bath to help me develop further,” said James.

As part of the New Products Integration department, James’ day is varied and he spends time between both the engineering office and the workshop floor. “In the engineering office, I’ll be writing work instructions, reports, some drawing updates and CAD modelling and planning engineering trials or investigations for the projects I’m working on,” James explained. “On the workshop floor, I’ll be spending time in build areas and inspection areas using various measuring and testing equipment, gathering data to support engineering development trials and investigations.”

Being at Moog has also given James the opportunity to travel, having recently been to the Philippines for an engineering trial: “After a long time working remotely from the UK to develop a solution to a problem, I was able to go to the Philippines and complete the trial there. It went really well, and the first assembly built using the new technique that had been developed worked perfectly when tested. This has led to further development work, and I’ll be travelling to the Philippines again this year for the next step in the project.”

Most of all, James has found that transitioning from an apprentice into a fully-fledged role meant that he was fully prepared for the challenges ahead. “As an apprentice, you’re treated as one of the team from day one. You progressively take on more responsibility and are expected to contribute to the department you’re working in,” James continued. “It meant I had a good understanding of all the different departments and processes, and I’ve met loads of friendly, likeminded people. I’m still learning and progressing, but I’m really pleased with what I’ve been able to do so far.”

“I’m glad I made the decision to do the apprenticeship route rather than go to university – I think it was the best option for me,” said James.